Sooo...after a long time of back and forth, lots of indecision, I've moved across the ocean to teach English as a bit of a career break.  Crazy as I thought it would sound to everyone in my world and buttoned-up profession, I've generally received nothing but support.  The last few days have been a whirlwind of moving out, moving in, lugging this and that everywhere, and busting out some mediocre Spanish (this is Spain, after all!) in order to get things done.

One of the major boo-boos about this move has been that I'll be without a sewing machine for at least a month.  Usually so organized, I did bring mine from home but forgot entirely about a wee problem relating to voltage/outlets/Europe.  Such a travesty.  It's true that my DIY time in this next month will be slim, as I'll be working through a pretty time-intensive training program, but I'll be popping into the blogosphere as much as I can and staying inspired.

For now, here's a glimpse of some high-waisted, thrifted silk shorts that I modified using Megan Nielsen's fab scalloped-shorts tutorial: 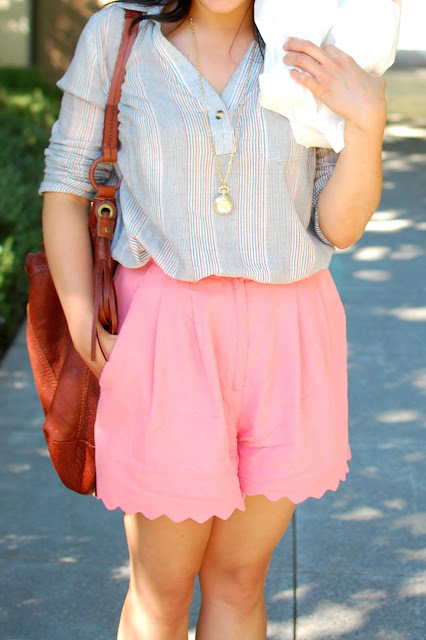 Rather than making a template on contact paper, though, I used card stock and traced the scallop design right onto the fabric, which worked well for me.  Anyway, I'll be wearing these until I can't reasonably milk the last traces of summer heat.  I've dubbed them the "Patrick" shorts because my scallops turned out a tad pointy and, for whatever reason, seem to me reminiscent of Patrick, that starfish from Sponge Bob.  Am I right?

Email ThisBlogThis!Share to TwitterShare to FacebookShare to Pinterest
Labels: DIY